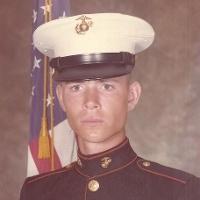 He was a graduate of Lafayette High School and following in the military tradition in his family, Sam served his country in the United States Marine Corps attaining the rank of Staff Sergeant.  Following his service and honorable discharge from the Marines, Sam worked for the former Chicago & Northwestern Railroad and later worked at Wal-Mart.

Sam continued to serve even after his passing by being an organ donor.

Memorials may be made to the United States Marine Corps Reserve "Toys for Tots" program.